The historic Long Bar is the home of the iconic Singapore Sling. The famous counter shines like new amidst decor that marries architecture and contemporary plantation-inspired motifs. Long Bar was located at Cad’s Alley in the early 1900s. At a time when improved rail and road systems brought rubber and palm oil plantation owners over to Singapore from Malaya every weekend, it was known as the ‘Rendezvous of Planters’. Not a formal bar, but rather tables placed next to another facing Bras Basah Road, it was a vantage point from which male visitors surveyed the procession of ladies.

The earthy decor of the two-storey Long Bar is inspired by Malayan life in the 1920s. The deep, rich colours and lush greenery transport patrons to the edge of a tropical plantation. In keeping with the relaxed atmosphere, guests are invited to brush peanut shells off the table and bar counter to the floor. This is quite possibly the only place in Singapore where littering is encouraged.

Following the turn of the century in colonial Singapore, Raffles was the gathering place for the community – and Long Bar was the watering hole. It was common to see gentlemen nursing glasses of gin or whisky. Unfortunately for the ladies, etiquette dictated that they could not consume alcohol in public. So, for the sake of modesty, teas and fruit juices were their beverages of choice.

Ever insightful, Ngiam thus saw a niche in the market and decided to create a cocktail that looks like plain fruit juice but is actually infused with gin and liqueurs. The clever bartender made the beverage pink to give it a feminine flair which, together with the use of clear alcohol, led people to think it was a socially acceptable drink for women. With that, the Singapore Sling was born. Needless to say, it became an instant hit.

Long Bar is open to walk-ins only. 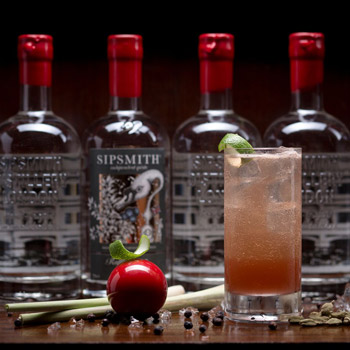 Enjoy craft cocktails, Champagnes, spirits & wines in our sophisticated lobby bar – an alluring space that pays tribute to the famous authors who have stayed at Raffles Singapore throughout the years.